Port City Quartet was formed by Will Lane and Terry Carter after both men left the Anchormen in 2017. The group's first performance was held in late December of 2017 with former Gold City member Robert Fulton filling the tenor spot and Joseph Offenberger singing lead alongside Carter (baritone) and Lane (bass). Musicians included Joe Lane at keyboard and Gaylan Drye playing bass guitar. Both Lane and Drye had played previously for Jordan's Bridge. Fulton's employment was only temporary until a permanent tenor could be hired. In early 2018, the membership of Port City Quartet was complete with the addition of tenor singer Rick Vance. 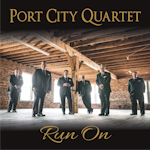 hi-res
2018 Run On (Custom Records): Run On; Had It Not Been; I’m Gonna Live Forever; I’m Free; Wedding Music; Lonesome Road; Thank You Lord For Your Blessings On Me; First Day In Heaven; O What A Savior; What A Morning; I Believe In A Hill Called Mount Calvary; Bonus Track: The Will Lane Menu/By Special Request.
All articles are the property of SGHistory.com and should not be copied, stored or reproduced by any means without the express written permission of the editors of SGHistory.com.
Wikipedia contributors, this particularly includes you. Please do not copy our work and present it as your own.