The modern Melody Boys Quartet can trace it's roots to a group called Herschel Foshee And His Stamps-Baxter Quartet. This particular group was launched by Herschel Foshee and "Smilin'" Joe Roper in 1946. Both Roper and Foshee had been members of the Stamps Melody Boys prior to World War II. Foshee and Roper based their new group in Jackson, Mississippi in 1946 before relocating to Carbondale, Illinois in 1947. In Illinois, they performied on WCIL radio. In early 1948, the group moved again, this time to Little Rock, Arkansas and KARK radio where the old Stamps Melody Boys had been based. The group members at that time were Russell Guest (tenor), Horace Comstock (lead), Melvin Redd (baritone), Hershel Foshee (bass and manager), and Joe Roper (pianist and arranger).

After Foshee‘s death in late 1949, future Melody Boys owner Gerald Williams joined the group at the age of sixteen to sing bass. With the addition of Williams, the group name was modified to Joe Roper And The Melody Boys Quartet. They stabilized with the membership of Rex Parnell, Fred Smith, Coolidge Faulkner, Gerald Williams, and Joe Roper. With Roper’s arrangements and song writing, the Melody Boys were highly competent musically and gained considerable popularity.

After the group's association with Stamps-Baxter ended, the group's popularity grew during the 1950s. They were part of the very first National Quartet Convention in Memphis in 1957. Joe Roper would retire the group in the late 1950s before joining the newly formed Prophets.

Gerald Williams would make several attempts at re-forming the quartet from the 1960s to the 1980s. Those attempts did not prove successful. It seemed the group was finished for good when it disbanded in 1986, but the following year, Williams joined a young trio by the name of Homeward Bound. With Williams' bass vocals transitioning the trio to a quartet, the name was changed from Homeward Bound to Melody Boys Quartet. Members included Mike Franklin (tenor), Jonathan Sawrie (lead), Chris Bennett (baritone), Gerald Williams (bass), and Steve Secrease (piano).

The best known lineup of the Melody Boys happened ten years later when Jeremy Raines began singing baritone. The Franklin/Sawrie/Raines/Williams line-up was together from 1998 until Sawrie left in 2002, and again from 2003-2004 when Sawrie replaced Ryan Seaton who had left to join Ernie Haase And Signature Sound. Both Sawrie and Franklin left in 2004, and Raines shifted from baritone to lead for another year before resigning his position. Franklin would return to the tenor slot in 2007-2008 and again in 2010 until the group was disbanded at the end of 2012. The announcement of the group's retirement was made in early 2012 by Gerald Williams, so their final year was an effective farewell tour with the last concert being held on December 31, 2012.

The Melody Boys were featured on the cover of Singing News in October 2002.

During his last stint with the Melody Boys in 2006, Gerald Williams had the honor of being inducted into the Southern Gospel Music Hall of Fame.

Other Melody Boys Groups
There were several musical groups of various genres that used the Melody Boys name prior to 1932 when the Stamps-Baxter Music Company began using the name. See Stamps Melody Boys for more information on the first Stamps-Baxter group.

Frank Stamps, who split from Stamps-Baxter in 1945 and formed his own Stamps Quartet Music Company had several quartets on his roster, one of which was called the Stamps Melody Boys. They operated for a while on KLRA radio in Little Rock. Members in 1949 included Jack Pittman, Richard Smith, Clarence Heidelberg, Doug Jones, and Reece Crockett.

1988 Classics (Independent Release): Give The World A Smile; Happy Rhythm; Land Where Living Waters Flow; Waiting For His Return; Jesus Is A Way Maker; Getting Ready To Leave This World; Just A Little Talk With Jesus; Won’t It Be Wonderful There; I’ve Got A Newborn Feeling; Swing That Golden Chariot Low (Gerald Williams, Doug Kramer, Jonathan Sawrie, Mike Franklin).

1989 Moods of Gospel While You’re Living For Tomorrow; Won’t It Be A Grand Homecoming; God Took The Hurt Out Of Loneliness; Silent Cries; I Know What He’s Doing For Me; The Devil Is A Liar; Pardoned; In Times Like These; Living Your Life For The Lord; No One Understands Like Jesus (Gerald Williams, Doug Kramer, Jonathan Sawrie, Mike Franklin)

1991 Classics Too (Independent Release): This Ole House; On The Jericho Road; Daddy Sang Bass; City Called Heaven; Peace In The Valley; My Labor Will Be O’er; I Love To Be Alone With Jesus; Jesus Is Mine; How Great Thou Art; Somebody Loves Me (Gerald Williams, Doug Kramer, Jonathan Sawrie, Mike Franklin).

1992 Requests (Independent Release): One Day At A Time; I’ll Meet You In The Morning; Why Me Lord; I’m Winging My Way Back Home; In The Garden; I’ll Fly Away; Precious Memories; Mansion Over The Hilltop; Just A Closer Walk With Thee; I Saw The Light (Gerald Williams, Doug Kramer, Jonathan Sawrie, Mike Franklin).

1993 New Tradition (Shine Records): Sinner’s Plea; God Is Great, Good, And Merciful; It Took Those Nail Scarred Hands; I Would Not Be Denied; He Touched Me; I’m On The Battlefield; When He Reached Down His Hand; They Saw Him Not; He Keeps Lifting; It Is Well With My Soul (Gerald Williams, Doug Kramer, Jonathan Sawrie, Mike Franklin). 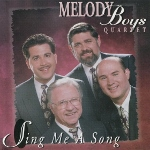 hi-res
1996 Sing Me A Song (Zion Records): Pray; From The Depths Of The Sea; He Knows Where You Are; My Soul Shall Live On; Well Of Grace; Somewhere, Someday; Sing Me A Song About Jesus; I’m Not Afraid To Cross Jordan; Glory On That Morning; Under The Blood (Gerald Williams, Doug Kramer, Jonathan Sawrie, Mike Franklin).

1998 Faith In My Savior (Wright Music/WMD9820): Faith In My Savior; He Will Make A Way; Workin' On A Building; No One But Jesus Knows; That's What Grace Is For; Yonder In Gloryland; You Must Have That True Religion; UFO; Listen; He Was Dying To Know You. (Gerald Williams, Mike Franklin, Jonathan Sawrie, Doug Kramer)

1999 Classics Collection (Wright Music): Give The World A Smile; The Old Rugged Cross; I’m Winging My Way Back Home; I’ll Meet You In The Morning; Lead Me To That Rock; This Old House/When The Saints Go Marching In; Keep Moving Along; Peace In The Valley; Jesus Is A Way Maker; Beulah Land; One Day At A Time; I Want To Know More About My Lord; Happy Rhythm; I’ve Got That Old Time Religion In My Heart; Wings Of A Dove; Just A Little Talk With Jesus; I’m Free Again; Getting Ready To Leave This World; The Lighthouse; On The Jericho Road (Gerald Williams, Jeremy Raines, Jonathan Sawrie, Mike Franklin). 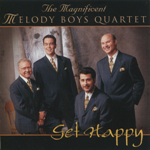 2000 50 Years Live (Wright Music): Give The World A Smile; God Is Great, Good, And Merciful; How Great Thou Art; Somewhere, Someday; Pray; Faith In My Savior; Gonna Get My Sins Forgiven; Mercy Called Me By Name; Over The Moon; It Is Well With My Soul; I’m Winging My Way Back Home; This Ole House/When The Saints Go Marching In; I’m Bound For The Kingdom; Shadows; The Devil Is A Liar; Lead Me To That Rock; Keep Moving Along; Jesus Is A Way Maker; I’ll Meet You In The Morning (Gerald Williams, Jeremy Raines, Jonathan Sawrie, Mike Franklin - Plus Alumni Quartet: Gerald Williams, Coolidge Faulkner, James Bureleson, Rex Parnell - Also Appearing: Jack & Betty Taylor, Marie Jarvis-Adams, Bob Boyd).

2001 Get Happy (Homeland Records/HED0102): Jesus Goes With Me; It’ll Happen Again; Don’t You Want To Go To Heaven; The Robe Of Calvary; All God’s Children Gonna Rise And Shine; Get Happy; The Value Of His Blood; Will The Lord Be With Me; Check It Out; Do You Know My Jesus (Gerald Williams, Jeremy Raines, Jonathan Sawrie, Mike Franklin).

2002 Talkin’ ‘Bout Jesus (Independent Release): Go Right Out; It’s Called Heaven; It Is No Secret; Delivered From The Hands Of Pharoah; Hold On, Weary Pilgrim; He Means Everything To Me; The Wondrous Word; Does Jesus Care; Is Anybody Talkin’ 'Bout Jesus Anymore?; He’ll Wash You Whiter Than Snow (Gerald Williams, Jeremy Raines, Jonathan Sawrie, Mike Franklin).

2003 A Wonderful Love (Independent Release): Forty Days And Forty Nights; Oh, But It’s Wonderful, Being A Child Of The King; He Bought My Soul At Calvary; My Journey To The Sky; A Wonderful Love; Lead Me In The Everlasting Way; I Call It Home; I’ve Got That Feeling; Celebration; Still One Nation Under God (Gerald Williams, Jeremy Raines, Ryan Seaton, Mike Franklin).

2004 I Owe It All (Independent Release): Riding On The Glory Train; You Just Don’t Know What Lonesome Is; My Heavenly Father Watches Over Me; Same Old Story; Tell Me Who; What A Happy Day; I Owe It All; Walk, Talk, And Sing; Father Of Love; Make My Move (Gerald Williams, Josh Noah, Jeremy Raines, Mike Franklin).

hi-res
2007 Classics Countdown (Independent Release): He’s My King; Take A Moment And Live; If Jesus Is There; He Will Surely Make It Alright; Way Up In Gloryland; He Wrote My Name; What A Meeting; I’d Rather Be An Old Time Christian; Just A Little Farther Is Home Sweet Home; How Great Thou Art (Gerald Williams, Caleb Matheny, Terry Robertson, Scott Baker).

hi-res
2008 Destination Heaven (Independent Release): All Aboard We’re Glory Bound; Little By Little; Oh Broken Heart; The Stone Was Rolled Away; The Lamb He Died To Save; Come To The Water; Sinner’s Plea; Lonesome Road; Glory Bound?; Give Me Jesus; I’ve Made It Home (Gerald Williams, Caleb Matheny, Steven Hickinbotham, Tim Williams). 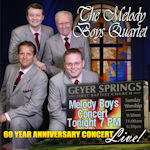 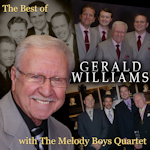 hi-res
2009 Best Of Gerald Williams With The Melody Boys Quartet (Independent Release): Give The World A Smile; Happy Rhythm; He Bought My Soul; Let The Lower Lights Be Burning; It Is No Secret; Walk, Talk, And Sing; I Owe It All; I’m Free Again; The Value Of His Blood; Sing Me A Song. 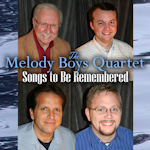 hi-res
2010 Songs to Be Remembered (Independent Release): Go Right Out; Wanna Rest; Well Of Grace; Workin’ On A Building; You Sho Do Need Him Now; Faith In My Savior; Listen; I’ve Got That Feeling; Is Anybody Talkin’ 'Bout Jesus Anymore; Will The Lord Be With Me (Gerald Williams, Caleb Matheny, Alan Kendall, Tim Williams).