Danny Gaither was a member of the original Pathfinders and the Bill Gaither Trio in the 1950s. The original Bill Gaither Trio consisted of Danny, Bill, and their younger sister, Mary Ann Gaither. Gloria Gaither later filled the role of female singer for the group after Bill and Gloria were married.

When the young Gaither Trio traveled to Ohio, they sometimes worked with Jim Hill And The Golden Keys Quartet. When Danny moved to the Portsmouth, Ohio area in the early 1960s, he was asked to join the Golden Keys and sing lead. He sang with them until 1966 when he returned to sing in his brother's trio.

During the next decade, many fans came to appreciate the smooth style of the Bill Gaither Trio with Danny singing lead. By this point, the songwriting team of Bill and Gloria was also contributing to their success as a performing group. Evangelist Billy Graham called on them to sing at his crusades, and their recordings were top sellers.

In the late 1970s, Danny had stress symptoms that affected his vocal cords, so he left the Bill Gaither Trio in 1977. In later years, Danny would appear on several Homecoming videos.

Danny won high accolades for his work, including numerous Grammy and Dove awards. He served as minister of music for his home church, Chesterfield Community Church of God. He was inducted into the (GMA Hall Of Fame) in April 1999.

Danny Gaither died in Indianapolis after a five-year battle with lymphoma. 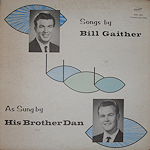 hi-res
196? Songs by Bill Gaither as Sung by His Brother Dan (Crusade Records/LPM 7801): I've Just Come From The Place Of Prayer; He Touched Me; Close To Thee; I've Just Seen Jesus; In The Upper Room; Manna From Heaven; (Even So) Lord Jesus, Come; Come Holy Spirit; Have You Had A Gethsemane; Haven Of Rest; They That Sow In Tears; No Greater Love. 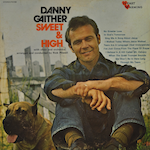 hi-res
1972 Sweet And High (Heartwarming Records/R3166): In God's Tomorrow; I Believe In A Hill Called Mount Calvary; When The Great Triumphant Sounds; I Walked Today Where Jesus Walked; We Won't Be In Here Long; Sing Me A Song About Jesus; Through My Tears; I've Just Come From The Place Of Prayer; Tears Are A Language God Understands; No Greater Love.

1974 Sing A Song Of Love (Impact Records/R3278): Take This Whole World/I'm So Glad I Found Him; For Those Tears I Died/Come To The Water; Sing A Song Of Love; O Love That Will Not Let Me Go; Love All The Brethren; Climbin' Higher And Higher; Satisfied/He's All I Need; This Is The Day The Lord Has Made; Come On Home; The Lord's Prayer.

1978 Singing To The World (Impact Records/R3527): Daybreak; You Needed Me; Somethin' Right; More Of You; You And Me, Jesus; Thanks For Just Being You; All The Time; Little Boy Blue; We Have This Moment Today; Great Is Thy Faithfulness/My Faith Still Holds.

hi-res
1979 Danny Boy (Impact Records/R3561): If There Were Only Time For Love; Danny Boy; Ever Since The Day; Treasure; Happier Than The Morning Sun; One Voice; Father's Eyes; In My Life; The First Time; Blessed Assurance.

1997 Moments Of Praise (Spring House Records/): Something Beautiful; He Touched Me; There's Something About That Name; God Gave The Song; I Am Loved; The Longer I Serve Him; Because He Lives; More Of You; Jesus Is Lord Of All; It Is Finished; Get All Excited; Every Eye Shall See; The King Is Coming; Let's Just Praise The Lord.

1997 Heartmender (Spring House Records/): I Know Just Who I Am; A Perfect Heart; Just A Little Bit More; Give Me Jesus; Heartmender; I Will Lift You There; All I Need; Paperboy; I Hope To See You There.
All articles are the property of SGHistory.com and should not be copied, stored or reproduced by any means without the express written permission of the editors of SGHistory.com.
Wikipedia contributors, this particularly includes you. Please do not copy our work and present it as your own.