Although his first musical experience came from singing with The Sons Of Liberty and with Squire Parsons, Christian Davis came to prominence as the bass singer for the Old Time Gospel Hour Quartet. He was the quartet's original bass and stayed with them until 2003, when he left to form his own group, the Christian Brothers Quartet. During this time, he also occasionally filled the bass slot for the Old Friends Quartet when George Younce was unable to perform due to ill health.

The Christian Brothers Quartet venture lasted until 2005, when the group disbanded. In late 2005, he filled in with Mercy's Mark at select dates after that group's original bass singer, Chris West, left the group. This prompted speculation that Davis would receive the bass position full-time.

On January 10, 2006, Southwestern Baptist Theological Seminary announced that Davis had been hired as the college's Associate Director of Recruiting for the college and its associated seminary. Davis's fans were disappointed, assuming that this meant the end of his Southern Gospel career.

However, just a few months later, Davis decided to return to the road. In spring 2006, Mercy's Mark announced that he had accepted the position of singing bass for their quartet. He left the group again in 2007. This time, it was for good, as the group disbanded in early 2008.

After the June 28, 2022 announcement that the LeFevre Quartet would be disbanding that fall, Davis filled in for the group's remaining months following the week of July 19, when bass singer Will Lane joined the Mark Trammell Quartet. 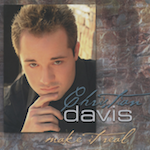 hi-res
2006 Make It Real (Custom Records/CP906): Thanks To Calvary; My Savior First Of All; We Seek Your Face; It Matters To Him About You; The Love Of God; He Touched Me; Beyond The Sunset; Beulah Land; The Lords Prayer; Make It Real
All articles are the property of SGHistory.com and should not be copied, stored or reproduced by any means without the express written permission of the editors of SGHistory.com.
Wikipedia contributors, this particularly includes you. Please do not copy our work and present it as your own.