The Statler Brothers were a country singing group from Staunton, Virginia, consisting of brothers Harold Reid and Don Reid, and friends Lew DeWitt and Phil Balsley. The group had their roots in southern gospel music and occasionally produced gospel albums during their career.

Prior to their formation, Harold, Lew, Phil and a lead singer named Joe McDorman sang together as teenagers in a gospel group billed as The Four Star Quartet. In 1961, the group officially reorganized at The Kingsmen with Harold's brother Don replacing McDorman. In 1963 after the song "Louie Louie" by another group called the Kingsmen became popular, they chose the name Statler Brothers. The name "Statler" came from a box of tissues.

As they transitioned into Country music, the Statler Brothers became the opening act for Johnny Cash in 1964. They were also featured as background singers on several of Cash's songs and appeared on Cash's popular album At Folsom Prison (1968). In 1965, "Flowers On The Wall" became their first top-ten radio single.

The group experienced just one membership change in their career. In late 1982, tenor singer Lew DeWitt left the group due to illness. In early 1983 he was replaced by Jimmy Fortune.

In 1991, the Statlers began a successful run with their self-titled variety series on the Nashville Network cable channel. The show lasted for eight years. The Statler Brothers retired from touring in 2002. Two new recordings including one gospel CD were released in 2003. 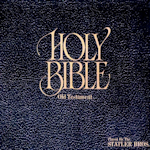 hi-res
1975 The Holy Bible - Old Testament (Mercury Records SRM-1-1051): In The Beginning, Eve, Noah Found Grace In The Eyes Of The Lord, Have A Little Faith, The Dreamer, Led Out Of Bondage, The Ten Commandments, Samson, Song Of David, Song Of Solomon, The Fourth Man, The King Is Coming. (D. Reid, H. Reid, Balsley, DeWitt).

1975 The Holy Bible - New Testament (Mercury Records SRM-1-1052): Who Do You Think, The Kingdom Of Heaven Is At Hand, Beat The Devil, The Brave Apostles Twelve, The Teacher, The Lord's Prayer, There's A Man In Here, How Great Thou Art, Lord Is It I, The King Of Love, The King Is Coming. (D. Reid, H. Reid, Balsley, DeWitt).

1986 Radio Gospel Favorites (Mercury Records): There Is Power In The Blood, We Won't Be Home Until Then, One Size Fits All, Sweet By And By, I Believe I'll Live For Him, A Different Song, Blessed Be, A Beautiful Life, Amazing Grace, Over The Sunset Mountains. (D. Reid, H. Reid, Balsley, Fortune).

1992 Gospel Favorites (Two Record Set) (Mercury Records): When The Roll Is Called Up Yonder, Rock Of Ages, Noah Found Grace In The Eyes Of The Lord, The Old Rugged Cross, Blessed Be, One Size Fits All, In The Sweet By And By, Turn Your Radio On, Amazing Grace, Love Lifted Me, There Is Power In The Blood, This Ole House, Precious Memories, How Great Thou Art, Jesus Is The Answer Every Time, Over The Sunset Mountain, I Believe I’ll Live For Him, In The Garden, A Different Song, Just A Little Talk With Jesus, A Beautiful Life, I’ll Fly Away. (D. Reid, H. Reid, Balsley, Fortune).

2003 Amen (Yell Records): A Place On Calvary, Hide Thou Me, It Might Be Jesus, He’s Getting Me Ready, God Saw My Need, Keep Your Eyes On Jesus, Jesus Living Next To Me, If It Only Took A Baby, The Far Side Banks Of Jordan, When I Take My Vacation In Heaven, I Should Have Known You Lord, A Living Part Of You. (D. Reid, H. Reid, Balsley, Fortune).