Kevin Williams was a native of Russell Springs, Kentucky.

He began his music career traveling with Wendy Bagwell And The Sunliters.

He is best known for playing guitar with the Gaither Vocal Band and on the Gaither Homecoming tour and videos where he served as the band leader for multiple decades. In addition to performing, Williams provided conversational comedy during Gaither concerts, often interrupting emcee Bill Gaither to get a laugh from the crowd. Williams also recorded solo guitar albums, worked extensively as a session musician and producer, and wrote songs.

In 2014, Williams launched a charitable organization called Kevin's Kids which raises money for needy children in the state of Kentucky.

hi-res
2021 Sit Up Straight And Sing: Vol. 1 (Custom Records): Leaning On The Everlasting Arms; Amazing Grace; Since Jesus Came Into My Heart; In The Garden; A New Name In Glory; Precious Memories; Victory In Jesus; I Surrender All; Dwelling In Beulah Land; Tis So Sweet To Trust In Jesus; Mansion Over The Hilltop; The Old Rugged Cross (Album includes both sung and instrumental versions of all songs for a total of 24 tracks.) (Mark Lowry and Kevin Williams). 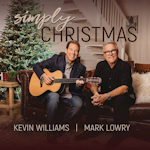 hi-res
2021 Simply Christmas (Custom Records): It's Beginning To Look A Lot Like Christmas; Winter Wonderland; I'll Be Home For Christmas; Oh Little Town Of Bethlehem; White Christmas; What Child Is This; Joy To The World; Have Yourself A Merry Little Christmas; Jingle Bells; It Came Upon A Midnight Clear; Mary, Did You Know (Album includes both sung and instrumental versions of all songs for a total of 24 tracks.) (Mark Lowry and Kevin Williams). 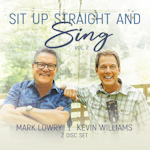 hi-res
2022 Sit Up Straight And Sing: Vol. 2 (Custom Records): Jesus Hold My Hand; Unclouded Day; Oh I Want To See Him; In The Sweet By And By; Jesus Loves Me; The Lily Of The Valley; This World Is Not My Home; Give Me Oil In My Lamp; Power In The Blood; What A Friend We Have In Jesus; Joy Unspeakable; I Feel Like Traveling On. (Album includes both sung and instrumental versions of all songs for a total of 24 tracks.) (Mark Lowry and Kevin Williams).