The Joylanders of Trenton, Tennessee formed in 1971. By 1995, the lineup included group founders Perry and Nell Wimberley, their daughter Vanessa Griggs, son-in-law Jason Griggs, and Jason and Vanessa's two children, Jay and Allison.

In 2016, the group was signed to the Skyland Records label which is a division of Crossroads Music. The following year, the group name was changed to Endless Highway. Perry and Nell retired from traveling by the time the group's first album under the new brand was released in May 2018.

2016 Parables (Skyland Records/): Why Don’t You Try Jesus; Leave It There; Without Grace; There’s No Other God; I’m Checkin’ Out; Heaven’s Ridge; I Know Where Home Is; Come To The Water; Sunday’s Comin’; Down In The Valley; Dry Ground; America, Bless God; The Old Rugged Cross; Now I Have Everything.

2018 East To West (Skyland Records/): It’s A Highway To Heaven; Under The Sea; It’s His Story; This Is The Grace I Know; Unbroken Promise; Count It All Joy; The Richest Crown; I’ve Got The Son In My Eyes; Go Ahead And Shout; Beautiful Scars Of Love; Out Of The Deep. (Jason Griggs, Vanessa Griggs, Jay Griggs, Allison Griggs).

2020 Countless (Skyland Records): Keep Lookin’ Up; Somebody’s World Changed Today; Countless; All That Remains To Be Seen; 26 Cents; ‘Til They Came Home. 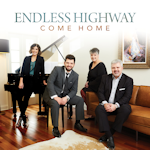 hi-res
2021 Come Home (Skyland Records): Resurrection Day; Come Home Kind Of God; He Rescued Me; Good Thing We've Got Forever; Take It From Here; Every Valley Has A Promise; Where The Hurt Meets The Healer; About The Business.