The Steeles began as a regional group in Mississippi anchored by husband and wife, Jeff & Sherry Steele. Future Country music star Faith Hill was an early member of the group.

They began to be noticed on the national scene during the 1990s. During these years, the group consisted of Jeff, Sherry and David Owens. In October of 1994, they had their first number one song on the Singing News airplay chart with "I Must Tell Somebody." Their second number one song, "God Kept His Promise," held the number one position in October, November and December of 1995. "I Got Up And Went" reached number one for the month of November in 1996. Their signature song, "We Want America Back," was number one for March, April, May and June of 1997. The success of that song led to a major tour and national attention beyond the scope of Southern Gospel.

After the departure of David Owens, the Steeles expanded the group to officially include their 16-year-old daughter Christy. They also added former Wilburns male vocalist Troy Peach and former Ruppes/Perry Sisters female vocalist Karen Akemon. This lineup recorded 2000's Left Behind, which included the concept title song. Although there was no official connection to the Tim Lahaye/Jerry Jenkins Left Behind series of books, the song was clearly inspired by the success of those novels.

On September 11, 2001, after the terrorist attacks on America, Jeff Steele hastily re-wrote the words to "We Want America Back" and performed the modified version that same evening at the National Quartet Convention in Louisville, Kentucky. The adapted title and focus of the lyric became "We Want America Free."

A few years later, the Steeles retired from full-time music when Jeff Steele became senior pastor at a church in Cullman, Alabama. In 2014, Jeff resigned as pastor and announced the Steeles were returning to singing. Joining Jeff & Sherry initially to sing the third part in the harmony was former Kingsmen and Palmetto State Quartet pianist Andrew Ishee. After a few months, Ishee was replaced by Matthew Thompson, who traveled with the Steeles for approximately a year and a half. In May of 2016, Thompson left the group and was replaced by Jeff & Sherry's son Brad.

Singing News Fan Awards: Album of the Year (1997 - We Want America Back)

hi-res
1991 Heaven's City Limits (Steeles Music/BO534): I Wanna Go Home; The Greatest Hero; I'm Not Ashamed; Touch Through Me; Heaven City Limits; All Things Work Together; The Story Goes On; Eyes Have Not Seen.

1994 Stirrin' It Up (Daywind Records): Mine Is; I Don't Have To Rewrite A Country Song; First To Hold The Lamb; I Mean To Be There; Heroes I Have Known; I Must Tell Somebody; Old Ship Of Zion; I Don't Wanna Go; Shoulder To Shoulder; May God Almighty Be Praised. 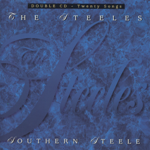 hi-res
1995 Southern Steele (Daywind Records): What A Mighty God; God Kept His Promise; I Got Up And Went; Warriors Of Gray; I Have Decided To Stay Excited; Jesus The Greatest Hero; It's Time To Choose; God Answers Prayer; How Do I Know; Ring The Bells. 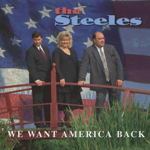 hi-res
1996 We Want America Back (Daywind Records/DAY1117): We Want America Back; Thou Art Worthy; Nothing To Lose; More To It Than Meets The Eye; Standing Here; Climbing Jacob's Ladder; Doin' What He Said; It's Still Thrilling Me; All Things Work Together; The Story Goes On. 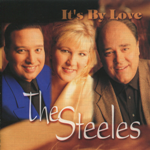 hi-res
1998 It's By Love (Daywind Records/DAY1145D): It's By Love; I Have A Promise Of Tomorrow; He's Gonna Touch Me; Cast The First Stone; We Are Redeemed; Another Way Out; Angels; The Lord Is Good; Soldier Of Light; Where Would You Be. 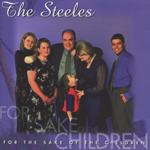 hi-res
1999 For The Sake Of The Children (Daywind Records/DAY1184D): For The Sake Of My Children; On The Road To Emmaus; Living Under His Wings; A Love That Won't Stop; Holy Ghost Revival; Servant's Heart; This Is The Place; God Is Even Greater; It's The Word; In My Eyes; Are You Saved; Plan Of Salvation. 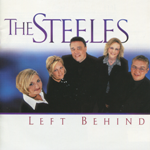 hi-res
2000 Left Behind (Daywind Records/DAY1219D): We Have So Much To Be Thankful For; I Am Your Father, I Am Your Son; If We Confess Our Sins; Good Time; Jesus Buried My Past; There For Me; Morning Does Come; Let Me Be The One; The Servant Of All; Left Behind. 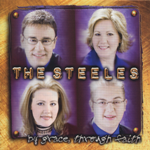 2002 Greatest Hits (Daywind Records): Oh What A Mighty God; I Must Tell Somebody; On The Road To Emmaus; I Have A Promise Of Tomorrow; We Want America Back; All Things Work Together; Another Way Out; In My Eyes; Good Time; It's By Love; Mine Is; Nothing To Lose; Left Behind; Shoulder To Shoulder; God Kept His Promise; Jesus Buried My Past; I Got Up And Went; For The Sake Of My Children.

hi-res
2004 Standing Room Only (Steeles Music/SMCD1003): God's Cemetery; Voice Of The Martyrs; The Land Of Beginning Again; Be Not Afraid; You Can't Go That Far; Standing Room Only; He Never Even Looks At The Man; Don't Run Away; I'll Never Get Over; The Prettiest Flowers. 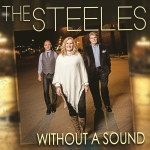 hi-res
2015 Without A Sound (Custom Records): Without A Sound; No God Like Jehovah; Who's At The Door; Whatever You Have Left; The Land Of Beginning Again; Voice Of The Martyrs; Say So; He Went All The Way; But God; I Have Been Blessed; Eternally; We're All Human. (Matthew Thompson, Sherry Steele, Jeff Steele).