The members of the Stamps Trio were young, but all had made a mark in gospel music prior to forming the group. They began their career around 1964, and it lasted less than a year.

Donnie Sumner was the baritone singer and pianist for the group. The unique sound of the Stamps Trio focused around his interesting arrangements and original compositions. Donnie is the nephew of the late J.D. Sumner. He received much of his formal training in the Music Education Department at Lee College in Cleveland, Tennessee. This trio demonstrated the ability to take songs both old and new and make them sound fresh and interesting.

The lead singer for the group was Byron Burgess. Byron had previously spent time singing with the Harmoneers Quartet and was also a member of the Rhythm Masters. He and Donnie often switched parts, so the title "lead singer" may be a bit misleading. Bryon possessed a very smooth voice, and was a noted vocal instructor at the famous Stamps Quartet School of Music.

Jim Murray was the tenor singer for the Stamps Trio. Jim's name became a household word among gospel music fans when he joined Jake Hess and the Imperials. Prior to joining the Stamps Trio, Jim had traveled the country with the Orrell Quartet. Jim added his beautiful tenor voice to the talents of Larry Orrell, Buddy Liles, Johnny Marine, and Chuck Ramsey in that fine young quartet. 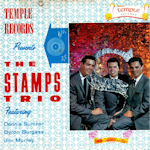 hi-res
1964 Presents The Stamps Trio (Temple Records/LPT-306/LST-308): God Is Everywhere; His Grace Reaches Me; From Now On; The Wayfaring Pilgrim; I'll Be Ready Then; Heaven; Time And Time Again; He's The Master Of It All; I'm Free Again; Jesus Savior Pilot Me; Remember Mama (Jim Murray, Byron Burgess, Donnie Sumner). 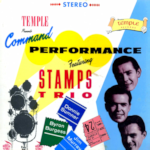 hi-res
1964 Command Performance Featuring The Stamps Trio (Temple Records/LPT-307/LST-309): Take A Little Time; Let The Lower Lights Be Burning; The Land Of No Night; I'm Free From Sin; No One Cared So Much; Lord I Would; Jesus Loves Me; That Is Why I Believe; He's So Good To Me; It Must Be The Man In The Sky; Heaven Medley; God Be With You (Jim Murray, Byron Burgess, Donnie Sumner).
All articles are the property of SGHistory.com and should not be copied, stored or reproduced by any means without the express written permission of the editors of SGHistory.com.
Wikipedia contributors, this particularly includes you. Please do not copy our work and present it as your own.