The Harmoneers were organized in 1943 by Fred Maples (baritone/manager). He was joined by Herbert Newman (tenor), Paul Stringfellow (lead), Sidney Braden (bass), and Charles Key (pianist). They were quickly signed to record on the RCA Victor label, but this was during World War II when opportunities to record were limited (and at times completely banned).

By 1945, Newman had been replaced by Bobby Strickland at the tenor slot and Aycel Soward was filling the bass position. Bob Crews would step into the lead position in 1947, and Seals "Low Note" Hilton took over the bass singing duties that same year. The following year, Happy Edwards became the tenor singer and the group line-up was consistent for several years that followed. It was around this time that the Harmoneers recorded several singles that were distributed under the name Maple Leaf Quartet. The alternate name was used, because their RCA Victor contract did not allow them to use the Harmoneers name on any non-RCA Victor recordings.

The Harmoneers disbanded for a short period of time when founder Fred Maples retired, but they soon re-grouped in 1957 with Happy Edwards (tenor), Bob Crews (lead), Shorty Bradford (baritone), Seals Hilton (bass), and Charles Key (pianist). By 1959, Jimi Hall had joined the group pulling double duty singing and playing piano after the departure of both Bradford and Key. The Harmoneers had a few more personnel changes over the next few years or so before disbanding around 1963. The final line-up of the Harmoneers included Happy Edwards (tenor), Byron Burgess (lead), Bob Crews (baritone), Seals Hilton (bass), and James Clark (pianist).

During the 1970s and 1980s, the configuration of Harmoneers that was first together from 1948 to 1953 (Edwards, Crews, Maples, Hilton, and Key) appeared at a number of reunion events. After Maples' death, Jimi Hall often appeared in the lead singer role.

Maples was added to the Southern Gospel Music Hall of Fame in 2003, and Edwards and Key were both inducted in 2006. 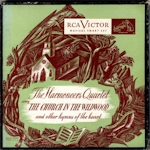 hi-res
1960 It's The Harmoneers Again (Skylite Records/SRLP-5972): God Made A Way; When I'm Alone; Tenderly; I'm Ready To Go; He Set Me Free; God Bless You, Go With God?; God Will Bless You All; He Will See You Through; Inside The Gate; When I Get To Heaven; I Have A Savior; Wonderful Love. (Jimi Hall, Bob Crews, Seals "Low Note" Hilton, Happy Edwards). 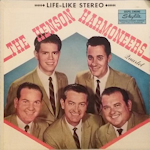 hi-res
1962 The Henson Harmoneers Quartet (Skylite Records/SRLP-5996): The Lord Is Coming By And By; Palace Of Prayer; I Know My Savior Is There; I've Got It, You Can Have It: When I Believed; Just Put Your Faith In Jesus; I Want To Know More About My Jesus; He Whispers Sweet Peace To Me; Living With Jesus; Little Biddy Chapel; When The Good Lord Calls Us Home; I've Found A New Way.