The Homeland Harmony Quartet can trace their roots to 1935. Original group members included Otis McCoy, Doyle Blackwood, Fred C. Maples, and B.C. Robinson who sang together as part of the Church of God denomination's Bible Training School ministry. Like most groups of this era, their history was interrupted by World War II. When the group reorganized around 1943, Otis McCoy and Robinson returned, joined by James McCoy and briefly by Eva Mae LeFevre. After Urias LeFevre returned from service and reorganized the LeFevres, Eva Mae joined her husband and Connor Hall became the tenor singer for the group that was to become the Homeland Harmony Quartet.

Hall acquired the right to use the name Homeland Harmony due to his connections with the Church Of God denomination's Tennessee Music & Printing Company. After the Homeland Harmony Quartet moved their base of operations to Atlanta, Georgia, they hired Hovie Lister to play piano and Big Jim Waits to sing bass. The last original group member, Otis McCoy, made the initial move to Atlanta, but soon decided to return to work at the Tennessee Music & Printing Company in Cleveland, Tennessee.

Connor Hall (tenor) and James McCoy (baritone) would remain constant with the group until they retired from full-time traveling. The other positions saw turnover. In 1947, Hall and McCoy were joined by Lee Roy Abernathy, Shorty Bradford, and A D Soward. It was this combination that first recorded Abernathy's song, "Wonderful Time Up There," also known as "The Gospel Boogie."

The Homeland Harmony Quartet retired in 1957. Connor Hall became the Music Editor for the Tennessee Music & Printing Company in 1961.

In the mid-1960s, the Sing record label approached Connor Hall to ask him to record a solo album. Hall agreed to record on the condition that he could put together a fresh version of the Homeland Harmony Quartet to sing with him in the studio. A total of two albums were ultimately made and released in 1966 and 1967. The line-up of Connor Hall, Jimi Hall, Fred Elrod, and Bill Curtis with pianist Dickie Mathews made some concert appearances, though they never returned to a full-time status.

In 1968, Hall revived the Homeland Harmony Quartet name with J L Steele, Bill Curtis, Fred Elrod, and pianist Jack Clark. This version of the group continued for many years singing on a part-time schedule.

When J D Sumner and Hovie Lister formed the Masters V in 1980, Sumner said his first choice for the position of tenor was Connor Hall. Sumner's rationale was that Hall had operated his own successful quartet for an extended number of years just like the other members joining the Masters V (Sumner himself, Hovie Lister, Jake Hess, and James Blackwood). Lister, however, was keen on bringing in Rosie Rozell who ultimately got the call. 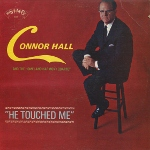 hi-res
1966 He Touched Me (Sing Records/LP602): I've Been To Calvary; I Wouldn't Take Nothing For My Journey Now; Show Me Thy Ways; Hide Thou Me; I'll Serve My Lord; He Touched Me; Keep On The Firing Line; Pass Me Not; It Matters To Him; The Rose Of Sharon; The Love Of God; He's A Personal Savior (Connor Hall, Jimi Hall, Fred Elrod, Bill Curtis, Dickie Mathews). 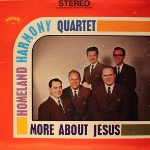 hi-res
1967 More About Jesus (Sing Records/LP603): Heaven; I'm Gonna Fly; Lord, I Get Homesick And Blue; You Must Make Up Your Mind; The Wonderful Love Of God; I Must Tell Jesus; His Name Is Wonderful; Sinner Be Ready To Go; Who Am I; If I Could Tell The World; Must I Go And Empty Handed; Noah (Connor Hall, Jimi Hall, Fred Elrod, Bill Curtis, Dickie Mathews).