Grady Lee Nutt was the oldest son of Grady C. and Doris Rickman Nutt. He began his career as a singer on KFDA radio in Amarillo, Texas when he was a child and was ordained as a Baptist minister at the tender age of 13. Nutt later earned degrees from Baylor University and Southern Baptist Theological Seminary. After graduating from Southern in 1964, Nutt became a recruiter for the seminary. This led to speaking engagements where Nutt began to develop a following as a humorist.

Eventually, Nutt left the university to travel as a hybrid comedian/evangelist. He appeared on The Mike Douglas Show and later hosted the show in Douglas' absence. By the 1970s, Nutt was recording albums of his humorous stories, many of which centered around his personal experience the previous decade as a young pastor as well as his childhood. He was added to the cast of Hee Haw in 1979 where he was billed as "The Prime Minister Of Humor," a title of an album released featuring Nutt in 1976.

In 1981, The Grady Nutt Show debuted on NBC. Nutt played a minister surrounded by a cast of characters who were constantly getting into trouble and needing Nutt's assistance to sort things out.

In 1982, the Kingsmen Quartet released an album titled Give The World A Smile that also featured Nutt's comedy throughout. Nutt also authored several books.

Nutt passed away during a plane crash after an appearance in Cullman, Alabama on November 23, 1982.

1976 The Prime Minister Of Humor

1980 All Day Singin' And Dinner On The Ground 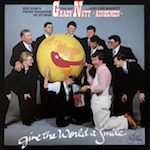 hi-res
1982 Give the World a Smile (with the Kingsmen Quartet) (Heartwarming Records/R3775): Give The World A Smile; On The Jericho Road; No Tears In Heaven; Looking For A City; Practice What You Preach; Turn Your Radio On; At The Cross; Jesus Keep Me Near The Cross. (Grady Nutt, Ernie Phillips, Jim Hamill, Wayne Maynard, Eldridge Fox, Ray Reese, Anthony Burger, Greg Fox, Sam Crowe, Ed Crawford).

1989 Funny Stories From The Prime Minister Of Humor