Kirk Talley started in Gospel music singing with the Hoppers. He moved to the Cathedral Quartet in 1979, and quickly became one of Southern Gospel's most popular tenors. He left in 1983 to start a trio, The Talleys, with his brother Roger and sister-in-law Debra. After they came off the road, he started a solo career, which (with the exception of his dates with The Trio) he continued for the remainder of the time he toured the Southern Gospel circuit.

Ivan Parker started singing with the Singing Americans in 1982. The next year, he joined Gold City, where he stayed for over a decade and won numerous individual and group awards. He launched his solo career in 1994.

At eight months old, Anthony Burger sustained burns so bad doctors said he would never be able to move his hands. Yet he started playing piano at three and started formal music lessons at five. He joined the Kingsmen Quartet at age 16; after winning the favorite musician award for ten consecutive years, from 1980-1989, the award was named after him. After leaving the Kingsmen Quartet, he split his time between a solo career and accompanying the Gaither Vocal Band and the Gaither Homecoming choir. Burger's time in The Trio was the first time he took a vocal part in a group; he had strictly been an accompanist previously. He died suddenly on stage, during a piano performance, on February 26, 2006, during a Gaither Caribbean cruise.

2000 The Trio Live - Anthony, Kirk, And Ivan (Parable Records): Marvelous God; The Lord Will Go Before You; Yes, Amen, Let It Be So; Something Beautiful; Glory Road; I've Got That Old Time Religion; What Will We Call The Group (Spoken); Learning How To Live Again; I Know; Could We Get Rid Of Ivan (Spoken); Gloryland Medley; Maybe Not (Spoken); Remembering Favorite Groups From The Past; What A Lovely Name; Surprise Guests; What A Night; He Is Mine And I Am His. (Anthony Burger, Kirk Talley, Ivan Parker).

hi-res
2001 Back By Popular Demand (Sonlite Records/SL29762): Hallelujah Side; I'm Glad I Know; He Rescues Me; Speak That Wonderful Name; I'll Keep Holding On To Jesus; I Love The Lord Down In My Heart (guest vocalist George Younce); Jesus, I Believe What You Said About Heaven; It's Amazing What Grace Did For Me; Precious Savior; In Just A Little While; More Than You'll Ever Know; Hallelujah Side (Reprise). (Anthony Burger, Kirk Talley, Ivan Parker). 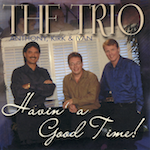 hi-res
2003 Havin' A Good Time (Sonlite Records/SL30202): It's Alright To Have A Good Time; God Has A Way Of Working It Out; He's So Good To Me; By Faith; The Blood Will Never Lose It's Power; Somebody Touched Heaven For Me; Whatever It Takes; Till The Storm Passes By; Sheltered In The Arms Of God; The Lighthouse; He Pilots My Ship; What A Day That Will Be; Where The Roses Never Fade; Step Into The Water; It's Alright To Have A Good Time (Reprise). (Anthony Burger, Kirk Talley, Ivan Parker).