Rex Nelon sang bass for Homeland Harmony Quartet from 1955-1957. He then sang bass for the LeFevres from 1957 to 1977. When Eva Mae LeFevre retired in 1977, Rex took over ownership of the group and changed the name to the Rex Nelon Singers, and later to the more commonly-known name of the Nelons. He also owned his own publishing company, the Rex Nelon Music Company.

hi-res
1965 I Wouldn't Take Nothing For My Journey (Sing Records/MFLP 3213): I Wouldn't Take Nothing For My Journey; Lovest Thou Me; What You Gonna Do; When I Reach That City; Deliverance Will Come; Come On Up To The House Of Prayer; I'll Follow Thee; I Know I'll Not Be Lonesome; The Answer Is On The Way; Peace In My Soul; Tribulation; Silver Hair Daddy Of Mine (Also released on LeFevre Sound/MFLP-3213. Ten songs were re-issued on 1983's Silver Haired Daddy Of Mine, Skylite Records/SLP-6295). 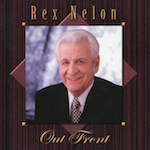 hi-res
1999 Rex Nelon Out Front (Homeland Records/HD9904): Take Off Those Rags Lazarus; Chains Of Yesterday; He’s My Best Friend; I Want To Be Like My Lord; Leaning Place; Jesus Is Alive And Well; It’s Over Now; A Wonderful Change; That’s Why (I Love To Call His Name); Love Will Roll The Clouds Away.