James Stephen "Big Chief" Wetherington was one of the most influential bass singers in Southern Gospel Music. He sang with the Sunny South Quartet and the Melody Masters Quartet before joining the Statesmen in 1949.

Statesmen leader Hovie Lister decided that Wetherington needed a nickname so Jim drew on his Native-American heritage and came up with the nickname of "Big Chief." It was by this name that he was best known to his fans. His unique style of bass singing influenced generations of Southern Gospel bass singers, and he remains the standard by which all bass singers are measured.

According to Statesmen lead singer Jake Hess, it was Big Chief and his unusual gyrations during concerts that influenced young Elvis Presley.

Wetherington was also an accomplished songwriter, penning the classic Trying To Get A Glimpse. He was a key member of the Statesmen until his untimely passing in 1973 as a result of a heart attack at the National Quartet Convention. 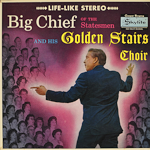 hi-res
1964 Big Chief At Home With The Golden Stairs Choir (Temple Records/LST-312): Highway To Heaven; Till I Know; Looking For A City; I Found The Answer; God Is Moving In This House; I Know He Heard My Prayers; I Will Slip Away Home; This Was Almost Mine; Grace For Every Need; I've Never Loved Him Better Than Today; Standing On The Promises; Higher Ground ("Big Chief" Wetherington, Golden Stairs Choir from "Assembly of God Tabernacle" Atlanta, Georgia). 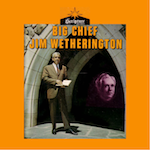 hi-res
1969 Big Chief Jim Wetherington (Scripture Records/S129): Jesus; Beyond The Sunset; Life's Railway To Heaven; Amazing Grace; Good Night And Good Morning; Dwelling In Bulah Land; Then Jesus Came; Blessed Assurance; A New Name In Glory; There Is A Fountain; When We All Get To Heaven; The Old Rugged Cross. 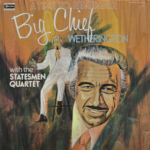 hi-res
1973 Big Chief Wetherington with the Statesmen Quartet - A Time To Remember (Skylite Records/SLP-6133): This Is The Day; When My Soul Takes Its Flight, I'm Free; No One Cared For Me Like Jesus; Faith Unlocks The Door; The Common Man; How Long Will It Take; Until You've Known The Love Of God; Great Is The Lord; That Somebody Is Jesus (Compiles performances from earlier Skylite masters).