Taranda Greene, Doug Anderson, and Jody McBrayer began performing together in late 2015 before they had an official group name. In 2016, they announced they would be billed as Cana's Voice and released their first CD. 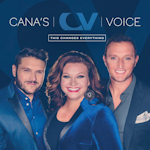 hi-res
2016 This Changes Everything (StowTown Records/3158): Heavenly Father; Give It To You; Jesus Never Fails; On Mountains Alone; All My Reasons Are You; Love Anyway; His Heart Is Big Enough; There Is A Mountain; Same Hands; Let The Blood Speak For Me; Hello Fear; I Won't Go Back; Holy Spirit Come Fill This Place. (Taranda Green, Doug Anderson, Jody McBrayer).
All articles are the property of SGHistory.com and should not be copied, stored or reproduced by any means without the express written permission of the editors of SGHistory.com.
Wikipedia contributors, this particularly includes you. Please do not copy our work and present it as your own.