After Effie Carter experienced a bout with pneumonia at the age of 18, it prompted her father David Carter to audition with son Ernest and daughter Lola for a job singing on radio station KFYO in Lubbock, TX. When the job was secured, David requested an advance to pay for Effie’s medical expenses. Effie recovered and joined the group to sing alto. The group was initially known as the Carter Quartet.

The following year, Effie was given the radio name “Anna” by talent agent Cy Leland. Although Effie had a 12-year old sister named Anna, she assumed it would only be a temporary change. The group name was soon changed to the Chuck Wagon Gang Of The Air, which was later shortened to the Chuck Wagon Gang. They were known for singing simple arrangements of western songs and using just an acoustic guitar for accompaniment.

Anna later married Howard Gordon, who served as the Chuck Wagon Gang’s guitar player. After Howard husband died in 1967, and with her brother Roy off the road, Anna, Jim Black, and Anna’s children Greg and Vicki made up the Chuck Wagon Gang for several months. In 1968, Anna married songwriter Jimmie Davis, a former governor of Louisiana and composer of the Country music classic “You Are My Sunshine.” She soon began singing regularly with Davis in a trio. Her son Greg went on to sing with the Imperials in the early 1970s.

In the early 1970s, the Chuck Wagon Gang did not tour. They did continue to record for Columbia Records, and Anna made herself available for the recording sessions. After the group began to tour part-time in the late 1970s, she sang with them sporadically, but eventually withdrew from the road permanently. 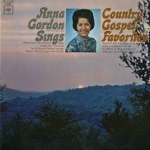 hi-res
1968 Anna Gordon Of The Chuck Wagon Gang Sings Country Gospel Favorites (Columbia Records CS9650): Walking A New Road; Remind Me Dear Lord; That Lonesome Valley; What Can I Do For A Man Called Jesus; Is My Lord Satisfied With Me; Mama’s Teaching Angels How To Sing; A Happy Day; Without God; It Is No Secret; Searching; The Old Account Was Settled Long Ago. (Anna Gordon backed by Millie Kirkham and The Oak Ridge Boys: Duane Allen, Bill Golden, Willie Wynn, Herman Harper).
All articles are the property of SGHistory.com and should not be copied, stored or reproduced by any means without the express written permission of the editors of SGHistory.com.
Wikipedia contributors, this particularly includes you. Please do not copy our work and present it as your own.