Conley Parris was a Southern Gospel bass singer. He was given the nickname "London" by Lee Roy Abernathy.

As a teen, he sang with the Harmony Kings which included W. R, James, and Lemar Sego (future founders of the Sego Brothers And Naomi). Parris found his first real success in 1955 when he joined the Rebels, replacing "Pappy" Jim Waits. Aside from a period of time in 1964 when Waits returned to the Rebels, Parris was their bass singer until 1968.

In 1968, Parris replaced John Hall with the Blackwood Brothers where he remained until 1971. In 1972 he formed London Parris And The Apostles, a group which lasted until 1976. In the early 1980's London Parris sang bass for the Senators and the Monitors Quartet.

He was inducted into the SGMA Hall Of Fame in 2004. 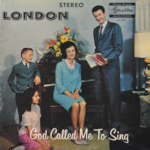 hi-res
1965 God Called Me To Sing (Skylite Records/SLP-6038): I Am A Pilgrim; I’d Rather Have Jesus; The Answer’s On The Way; No, Not One; I Won’t Have To Cross Jordan Alone; Jesus, Hold My Hand; Born To Serve The Lord; God Called Me To Sing; A Man Called Jesus; On The Jericho Road; Neither Do I Condemn Thee; Hold To God’s Unchanging Hand (Also issued on (Festival Records/LP-6406).

hi-res
1968 Heaven Came Down (Zondervan Records/ZLP 728): Heaven Came Down And Glory Filled My Soul; I Must Tell Jesus; Over The Sunset Mountains; Cleanse Me; Sweet By And By; Never Grow Old; Faithful Is He; Do Lord; I'll Be At Home With Jesus; Is He Satisfied; The Unclouded Day; Higher Hands.

hi-res
1969 The Sounds Of London Parris (Zondervan Records/ZLP 747): This Is Our Land; The Old Gospel Ship; It Was Love; Without Him; Lord, It's Me Again; Whole World In His Hands; The Shepherd Of The Stars; It Don't Mean A Thing; Wayfaring Stranger; What You Gonna Do; Is It Well (With Your Soul); Beautiful Isle.

1970 Daddy Sang Bass (Victory Records/Zondervan Records/ZLP 771): Life's Railway To Heaven; I Came Here To Stay; The Way Is The Way Of The Cross; Just A Closer Walk With Thee; Now I Have Everything; What A Friend We Have In Jesus; Rock Of Ages; The Old Rugged Cross; Abide With Me; In The Garden.

???? Sincerely Yours (Steeple Records/STP 3018): Turn Your Radio On; On The Jericho Road; I Find No Fault In Him; He Ain't Heavy, He's My Brother; Must I Go, And Empty Handed; Them Boys; One More Valley; Sheltered In The Arms Of God; The Master Designer; The Holy Hills Of Heaven Call Me.
All articles are the property of SGHistory.com and should not be copied, stored or reproduced by any means without the express written permission of the editors of SGHistory.com.
Wikipedia contributors, this particularly includes you. Please do not copy our work and present it as your own.