Scroll down for the Liberty Quartet based in Georgia.

1998 Song Of Liberty (Liberty Ministries/4176): A Comfort To Know; Over In The Gloryland; The Old Account Was Settled; Dig A Little Deeper; The Man I Used To Be; It Is Not What’s Over The Door; Song Of Liberty; Climbing Higher And Higher; Meet Me At The Cross; Room At The Cross; I've Read The Back Of The Book.

2004 Timeless Treasured Hymns (Liberty Ministries): The Old Rugged Cross; What A Friend We Have In Jesus/Jesus Is The Sweetest Name I Know; Heaven Medley; How Great Thou Art; Just As I Am; In The Garden; Holy, Holy, Holy; Precious Memories; Face To Face; Rock Of Ages; Amazing Grace; Beyond The Sunset; It Is Well With My Soul; What A Day That Will Be/Until Then (Paul Ellis, Dan Gilbert, Doran Ritchey, Royce Mitchell)

2005 Do You Know Him (Liberty Ministries): New Jerusalem; The Highest Hill; Tears Of Joy; He Had To Hold To Calvary; All The Way; He Included Me; The Wonder Of His Love; Contagious; Heaven's Home; The Spirit And The Bride Say Come; We Seek Your Presence; Do You Know Him (Paul Ellis, Dan Gilbert, Doran Ritchey, Royce Mitchell)

2006 Old Time Gospel Songs (Liberty Ministries): I Found It On My Knees In Prayer; Standing In The Need Of Prayer; On The Jericho Road; I Want My Light To Shine; Hold To God's Unchanging Hand; I'm Gonna Walk; There's A Little Pine Log Cabin; This World Is Not My Home; In My Father's House; Leave Your Sorrows And Come Along; I'm Gonna Shout All Over Heaven (Keith Waggoner, Dan Gilbert, Doran Ritchey, Royce Mitchell)

2007 Timeless Treasured Hymns Volume 2 (Liberty Ministries): Jesus Saves; Have Thine Own Way; My Savior's Love/And Can It Be; Battle Hymn Of The Republic; I Will Praise Him/Doxology; When The Roll Is Called Up Yonder/Hallelujah We Shall Rise; Blessed Assurance; Trust And Obey; Christ Arose/Christ The Lord Is Risen Today; Count Your Blessings; No Not One; Crown Him With Many Crowns/Sevenfold Amen; Leaning On The Everlasting Arms/Sound The Battle Cry/Onward Christian Soldiers; Abide With Me (Keith Waggoner, Dan Gilbert, Doran Ritchey, Royce Mitchell)

2008 Say It Again (Liberty Ministries): I'd Like To Say It Again; I Can See The Hand; The Eastern Gate; Still Feelin' Fine; The Lighthouse; Everywhere I Go; Ride That Glory Train; I'll Tell It Wherever I Go; There's A Light At The End Of The Darkness; Temporary Home; Bus Driver; Baritone Whine (Keith Waggoner, Dan Gilbert, Doran Ritchey, Royce Mitchell)

2008 Amazed (Liberty Ministries): Amazed At The Change; Keep Me; Broken But Blessed; Just Stand; Into The Water; Call It What It Is; Music At Midnight; He's Been There Too; Why Wouldn't I; He Will Quiet You; That's What Love Does. (Keith Waggoner, Dan Gilbert, Doran Ritchey, Royce Mitchell).

2009 The Journey (Liberty Ministries): The Journey; He Came Down To My Level; I Made It Mine; I Love Living In Grace; Till There Was Jesus; God Made A Way; He Came To Me; The Welcome; Too Long; He'll Come Through; In The Day Of The Lord; Welcome To Heaven. (Keith Waggoner, Dan Gilbert, Jordan Cragun, Royce Mitchell, Doran Ritchey). 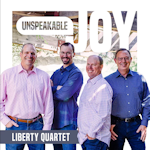 hi-res
2020 Unspeakable Joy: Passing The Faith Along; Wonderful Grace Of Jesus; He Brought Me Out; My Faith Has Found A Resting Place; Living By Faith; I’ve Got A Love; Joy Unspeakable; God Bless America; My Prayer For America; He Died For Me; Crown Him Lord Medley; The Heavenly Parade; New Born Feeling; Down To The River To Pray; I’ll Be Somewhere Listening; My Wonderful Lord; I Know Whom I Have Believed; O What A Happy Day; Pray; Rise Come And See The King; God Rest Ye Merry Gentlemen; Standing On Holy Ground; Dig A Little Deeper; All Your Anxiety; You Are My Father.

2021 Miles Of Miracles: Miles Of Miracles; Just Can't Help But Tell It; Redemption's Song (with Satisfied); Cast Your Cares; Never Again; Guilt Was Covered By Grace; Praise Him Now; Thank You For The Song; Problem Solver; All Is Well; I Can Count On The Lord; He Is Who He Says He Is; One Song Away.

In 1981, Danny Bennett, a local church pastor in Cumming, GA, organized a group with his wife, Vickie and another couple, Mickey & Pam Woods. Joey Pirkle was the pianist, and Jerry & Marilyn Baker were the bass guitarist and organist. They recorded one album at Mark Five Studios in Greenville, SC. After a year or so, The Woods the group left, and they were replaced by Jacky Fortner and Jimmy Orr. After the mixed group formally disbanded in 1984, Pirkle and Fortner decided to put together an energetic group of young men to form a male group featuring the vocal talents of Ronnie Grizzle, Darryl Bagwell and songwriter, Gerald Sweatman. They soon became a well-known local/regional group. After gaining some success on the radio with some original songs (from their first 3 albums produced by Jim Hamill of The Kingsmen Quartet), the group was signed to Eddie Crook's "Harvest" label. Bagwell left the group, and was replaced by Rick McVey as bass singer. Even though they had incorporated as "The Liberty Quartet, Inc." with the State of Georgia in the early 1990s, they dropped the word 'Quartet' when McVey left the group, and they became known simply as 'Liberty'.

The group signed with "Dawn Records", a division of (then) Horizon Music Group based in Asheville, NC. Some of their most-loved songs came from that era, and the group found themselves traveling extensively all across the Eastern side of the USA. From Michigan to The Bahamas, and from Pennsylvania to Texas, they were regularly found on some of the largest Gospel Music stages, including The NQC and Singing In The Smokies and many other multi-day festivals. They were also mainstays on Templeton Tours' "Jubilee At Sea" cruises for many years. 1995, Sweatman, Grizzle, and a few other members decided to leave the group. Fortner, and then pianist Charlie Sexton, determined to once again regroup, and they presented a fresh, young crop of fellows that, too, were quickly embraced and carried on the legacy of a group called 'Liberty' for a few years. The group evolved back to a mixed group when Fortner's daughter, Abi, joined her dad in 2002. Eventually, due to health concerns, Fortner disbanded the group in 2003.

1981 To Them That Love The Lord (Mark Five Records / LQ-6009): Step Into The Water; Beautiful Home; Green Pastures; Romans 8:28; It Will Be Alright With Me; My Lord Will Send A Moses; Canaanland Is Just In Sight; When I Cross To The Other Side Of Jordan; My Labors Will Be O'er; I've Never Been This Homesick Before. (Danny & Vickie Bennett, Mickey & Pam Woods, Jerry & Marilyn Baker and Joey Pirkle) 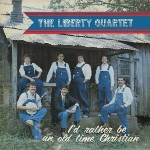 hi-res
1984 I'd Rather Be An Old Time Christian (Mark Five Records / LB-6165): I'd Rather Be An Old Time Christian; Beyond The Clouds; Jesus Is There; That Will Be A Happy Morning; I'm Going Home; I'm Gonna Move Up To Heaven; Homesick For Heaven; Oh What A Glad Day; When Crossing Time Shall Come; I'm In The Gloryland Way. (Jacky Fortner, Ronnie Grizzle, Gerald Sweatman, Darryl Bagwell, Joey Pirkle, Jerry Baker, Tim Sweatman)

1986 Great Is The God I Know (New Morning Records / NW-1685): Great Is The God I Know; I'm Just Excited; Sailing Toward Home; He Won't Bother Me No More; Look What's Waiting For Me; I'll Rest; Look For Me, I'll Be On The Glory Flight; I'll Forget Living Down Here; I'm Not By Myself; The Storm Is Over. (Jacky Fortner, Ronnie Grizzle, Gerald Sweatman, Rick McVey, Joey Pirkle, Jerry Baker, Tim Sweatman, Tim Hamilton)

1986 A Talk With The Master (Phyffe Brothers Recording / ??-????): ; I've Never Been This Homesick Before; Living In Canaan Now; They're Holding Up The Ladder; O,What A Savior; A Talk With The Master; ICan Feel The Tug; Hallelujah, I'm Ready To Go; Looking For A City_Instrumental. (Jacky Fortner, Ronnie Grizzle, Gerald Sweatman, Rick McVey, Joey Pirkle, Jerry Baker, Tim Sweatman, Tim Hamilton)

1987 Come On Home (Harvest Records / HAR-1118): I Went Down A Beggar, But I Came Up A Millionaire; Have Thine Own Way; John Saw Me; I've Been Invited; Everywhere I Go; The Royal Banquet; O I Want To See Him; Come On Home; It's The Only Way To Go; Heaven's Really Gonna Shine. (Jacky Fortner, Ronnie Grizzle, Gerald Sweatman, Rick McVey, Joey Pirkle, Jerry Baker, Tim Sweatman, Tim Hamilton)